Saab: Company is confident about Gripen sales, but 300 units is a tough ask 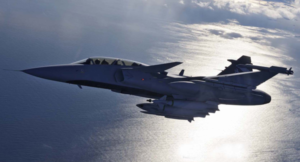 In a world full of eye watering price tags and ludicrous development times the Saab Gripen fighter jet has been able to carve out a path of its own. For those unable to pay the entry fee for an F-35, F-22 or Eurofighter, there are few other options to maintain a viable air defense system that can compete with dangerous neighbors. For those that can afford it, sometimes it not politically expedient for the west to sell their prize fighter jets to countries they are suspicious of, so they usually visit China or Russia for an alternative. However, if you are a western friendly country and would rather not do business with China or Russia, but cannot pay top dollar, the Swedish Gripen is a good alternative.

There have been multiple varieties of the Gripen but the recent NG versions are starting to look very competitive. Saab is buoyant about its chances in 2017 and has stated it hopefully will sell 300 units over the latest Gripen production run. Despite this good unique selling point and some contracts lined up. It is very difficult to see where these sales will come from and will that allow the Gripen to remain a viable product in future?

The Gripen is well designed and Saab has not heaped itself with a huge amount of pressure to design an entirely unique and homemade Swedish product. As a result, prices have been kept lower by using parts from multiple manufacturers from all over the globe. Since 1995 the Gripen has been joint marketed by BAE as well as Saab which allows the product to be sold through the contacts of the larger British defense conglomerate and its government. As is usually the case though, the defense industry is full of political and diplomatic complications that are not purely logical and the Gripen for instance had a deal with Argentina scuppered by the fact that the company uses British made parts.

Whilst the specific selling point of the Gripen has been to capture western friendly nations that cannot afford more expensive machinery, part of the problem for the future is that these countries have a small demand for vehicles and update slowly and in limited orders

Gripen includes some unique tricks in order to maintain an advantage and keep the ability of the vehicle high, without compromising the intended low price point of the vehicle. AESA radars have changed aerial combat, offering huge improvements in range, resolution, fast scanning capabilities, stealth and reliability for radar systems.

SAAB has done an excellent job with its new Gripen range and in theory should be able to snatch a high market share with relative ease as it can keep up with the most expensive vehicles on the market whilst being less than a third of the price in some cases. The problem is that previous Gripens have been good products too and they were unable to break the top ten in sales terms despite this.