Large-scale lending has become a key component for the economic growth of Britain’s economy since the 1980s. It has aimed to incentivise British consumers to permanently increase their borrowing rates and consumption. This practice has boosted the profitability of the British financial system by an unimaginable scale. It has generated a permanent stream of cash flowing from consumers to the banking system based on the acquisition of mortgages and consumer credit to purchase durable and nondurable goods. It has also helped households to navigate through a prolonged period of house price increases to this date.

Nearly a decade ago, this highly profitable but also highly leveraged system was shaken up by the financial crisis in 2008. In the aftermath of financial crisis, international financial markets became dysfunctional and credit dried up following the collapse of major banks and insurance companies in the US and in the UK. Consequently, commercial banks in Britain were desperate for cash to cover their asset and liability mismatches. As a short term solution, the Bank of England (BoE) tried to clean up the mess by adopting a highly unusual monetary policy. It pressed on with Quantitative Easing (QE) announcing that it would artificially create money by increasing its liabilities to support the financial system and, more broadly, the economy.

The bank bought government debt (gilts) and other assets from pension funds, commercial banks, insurance companies and non-financial firms from 2009 to 2011. As of February 2016, the Bank of England has purchased £375bn worth of assets from financial institutions and, consequently, increased the money holdings of the financial sector by the same magnitude.

The effectiveness of QE is difficult to measure according to Bank of England studies but it was expected that low interest rates and an increase in liquidity would bring consumer lending back on track and push inflation up. In addition, it would help the banks to clear bad debts.

The figure below compares the magnitude of the BoE policy with the overall level of lending to consumers in the UK since the beginning of QE. It clearly shows that the effectiveness of QE to boost consumer borrowing has been negligible compared to the increase of £375bn of money holdings of the financial system. This leads us to conclude that banks mainly used the scheme to restructure their balance sheets. 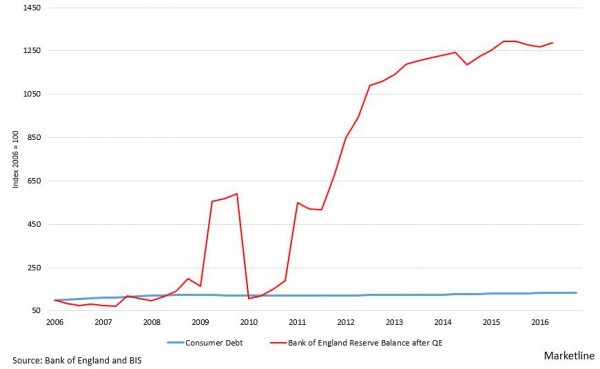 At the same time, as shown in the figure below, lending to consumers, which has been expanding at a rate of 8.6% per year before the slowdown of 2008, suffered a significant reduction. Commercial banking in Great Britain has not been profiting as much from lending to consumers as it had been before the crisis hit. This adds up to their current struggle. Lending to consumers is expected to reach beyond £1,6 trillion by the end of 2016 well below the pre-crisis path.

Lending from UK banks to consumers 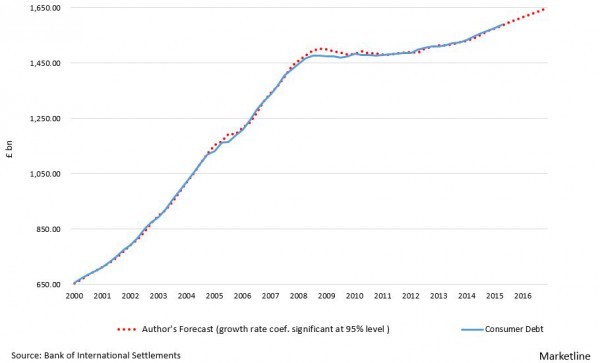 This brief analysis reveals that QE did very little to revive the lending to consumers in the UK and the injection of £375bn into the economy was mainly used by banks to clean bad debts from their balance sheet. The sharp reduction in banking lending to consumers has eroded banks’ revenues and profitability in recent years. Contrary to the aims of QE, banks will try to fill the gap by increasing, instead of decreasing, the interest rates charged on mortgages and credit cards. In addition, they should also introduce a wide range of paid services. Perhaps, the foundations of the British economy with its core centered on a robust banking system suffered an irreparable damage.