Companies House data demonstrates that more companies have been incorporated in the Greater Manchester region in the 21st Century than anywhere else outside of London. This appears to provide some evidence for the Chancellor’s siren calls of Northern England and particularly the North West becoming a power house of the UK economy, able to compete not only with London but internationally as well. Figure 1 shows the concentration of incorporations across the UK in recent years, it can be seen that Birmingham is also a hub of activity. 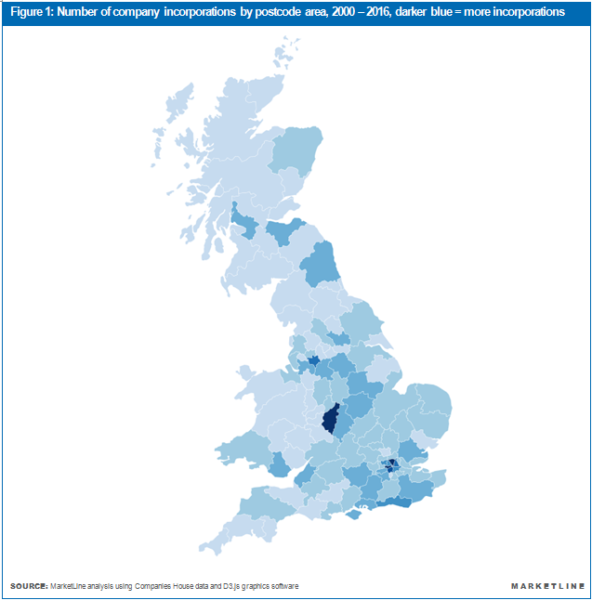 On further inspection of Companies House data since the global financial crisis, the number of UK incorporations has risen dramatically, indicating a structural shift in the nature of the UK economy and marking March 2016 as the most entrepreneurial month in the UK this millennium (based purely on the number of incorporations being made).

The impact of this rapid increase is difficult to pull apart and it may be too early to assess what these changes are driving towards on a wider basis. However, based on an initial assessment across a range of economic indicators, some of the theoretical relationships one would expect to find are simply not there. Firstly, the rate of employment bears only a negligible relationship with an increase in the number of companies and the small relationship that does exist is a negative one, i.e. employment declines when incorporations increase in number. Secondly, corporation tax revenues have a very weak relationship with greater incorporation rates, suggesting that although recent reductions in the headline rate of corporation tax have more than likely attracted businesses to open UK companies, this has not actually been beneficial to the government purse. An analogy would be a company reducing its prices to sell more products but only obtaining the same level of revenues – it has to do more work to achieve the same result.

Whilst it should be noted that this analysis does not account for dissolutions of companies (since this data is not populated in the Companies House data set), the complex system of networks upon networks of companies, consumers and employees is likely to be far more subtle than current UK politicians would have people believe. Regulatory business incentives that are likely to have caused the rapid rise in incorporations may only really serve to create more companies without much wider benefit, suggesting that a more balanced approach might produce more tangible results.